Hard evidence that Canoe Man’s 2002 crime was purely No8 driven!

Friday 18th of March 2022 [updated Tuesday 22nd of March 2022]: Pamela Bilalova writes this for Hartlepool Mail: The Thief, His Wife and the Canoe (it was a RED canoe) retells the story of how Darwin faked his death in a canoeing accident off the Seaton Carew coast in 2002 before plotting with wife Anne to begin a new life in Panama. The television drama, starring Eddie Marsan as John Darwin and Monica Dolan as John’s wife, Anne Darwin, is set to air in April 2022. The Thief, His Wife and the Canoe is based on the unpublished manuscript of David Leigh, who was the first journalist to track down Anne as she was on the verge of setting up a new life in Panama. The programme will include the toll the deception took on her after she lied to their sons about John being dead for five years.

Number 8 is all about money, power, control and karma!

At Christmas in 2007 John walked into a London police station claiming amnesia. But his and Anne’s lies were exposed by the discovery of an infamous photo of them posing together in a Panama real estate office in July 2006. John and Anne were jailed for more than six years in 2008 after he admitted fraud offences and Anne was convicted after a crown court trial. Using just numbers, we systematically unpack the detailed human futurology of fraudster John Darwin and reveal that the devious and deceitful Canoe Man’s 2002 crime was purely No8 driven, number 8 synching with money, power, control, material matters, karma etc.

John Darwin was arrested and charged with fraudulently obtaining a passport and claiming money by deception. His wife—who was also arrested and charged, having claimed the money on his life insurance—alleged he had been secretly living in their house and the house next door, and that the couple had planned to set up a hotel for canoeing holidays in Panama. 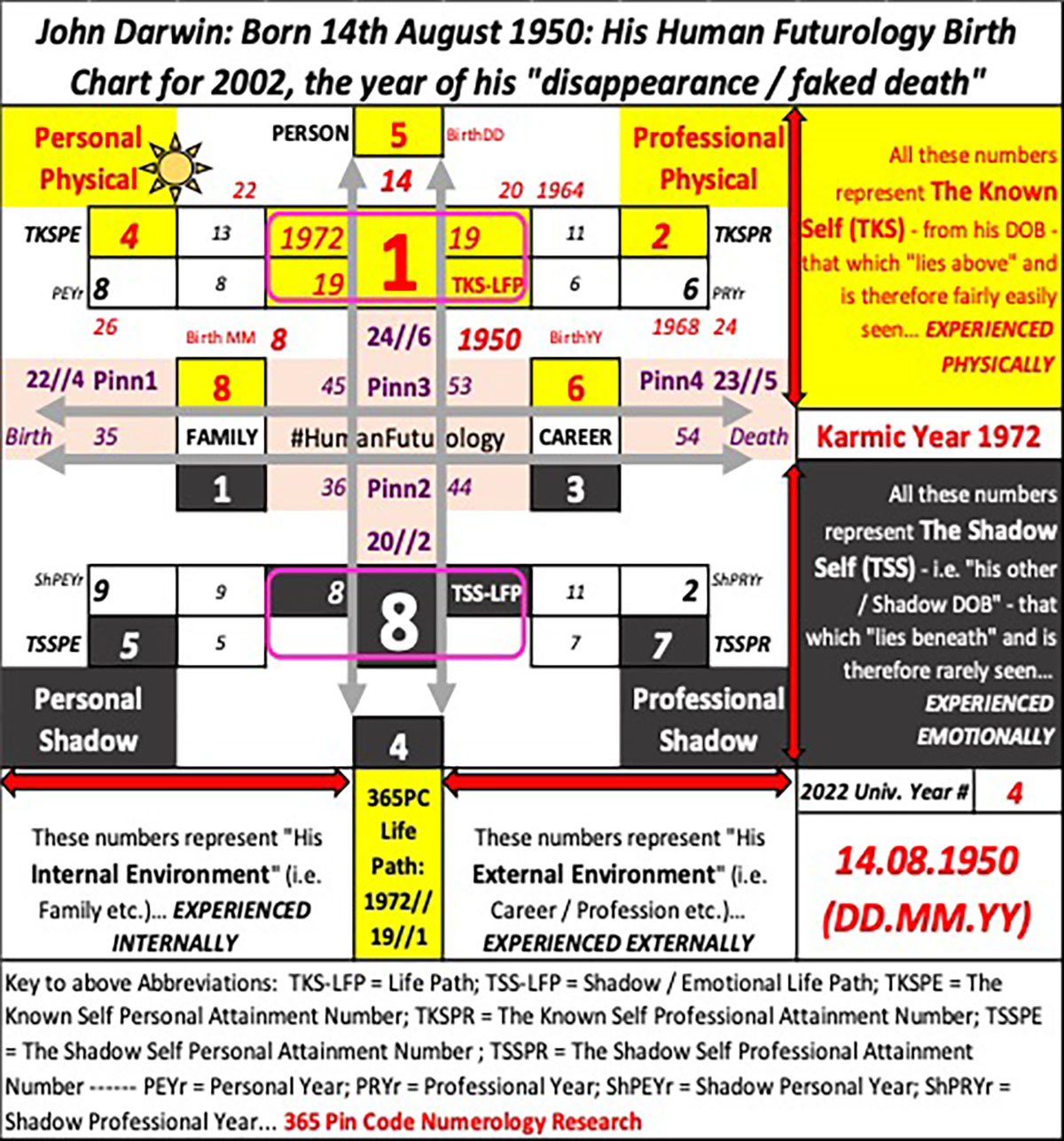 To focus your mind, let us remind you that the number that themed the human futurology of fraudster John Darwin for 2002, was No8 and that 8 is a earth number (no surprise then that JDs greatest financial lessons would centre around property and the property rental business). In his birth chart, the No8 appears as his shadow or emotional life path number [see TSS-LFP; lower centre of chart]. This emotional 8 talks to his life’s journey having to navigate powerful emotions around money and material matters. The No8 also appears as his family number, being born in August, the 8th month of the year, and in this instance, what the earthed No8 is asking of him is to provide others with safety, security and stability. John is born on the 14th, which brings karmic debt number 14//5 into play. KD14//5 is the freedom-loving, senses-driven, live-life-large hedonistic number which themes around the brutally tough life lesson that true personal (1) freedom (5) comes from the disciplined (4) focused (4) and persistent (4) application of self (1) to the task at hand (4). If you want to better understand KD14//5 there’s no better representation of its dark side than through the 365 Pin Code design of Ghislaine Maxwell, deceased paedophile Jeffrey Epstein’s partner. John Darwin has a karmic debt 19 life path [see TKS-LFP; upper middle of chart; sequence 1972//19//1; calculate your unique life path sequence]. The brutally tough life lesson that KD19 teaches its owner is that he/she may not selfishly and cynically enrich (money theme!) himself/herself at the expense of others! If he/she does this, then devastating emotional experiences around money and material things (the shadow life path No8) will surely follow. 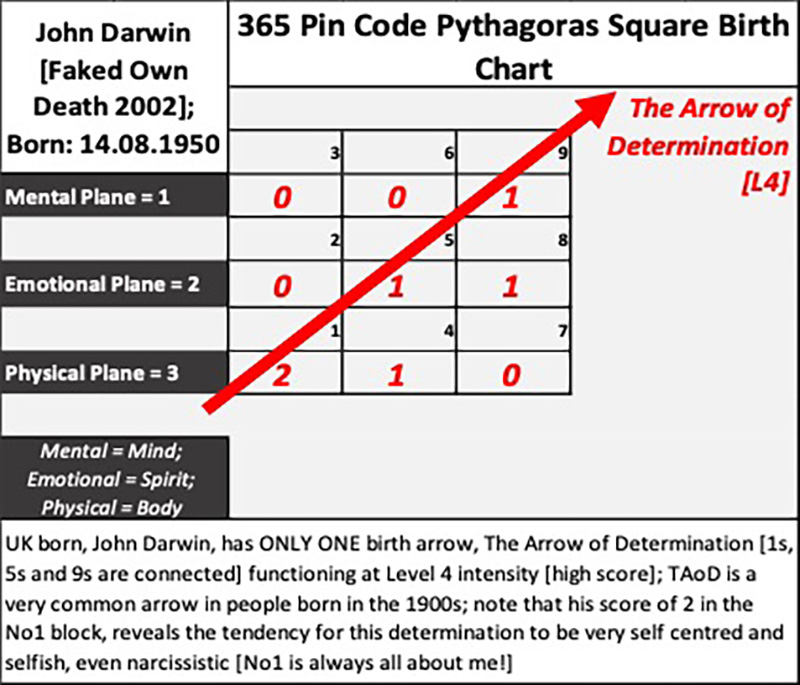 UK born, John Darwin, has ONLY ONE birth arrow, The Arrow of Determination [TAoD: 1s, 5s and 9s are connected] functioning at Level 4 intensity. This is a high score for TAoD. People scoring 4 or more [highest score we have ever recorded for TAoD is 7, belonging to Kris Jenner] for this specific arrow are usually bull-headed individuals who cannot be reasoned with once they have made up their mind as to what they are going to do. TAoD is a very common arrow in people born in the 1900s because the 1 and the 9 are already present with only the 5 needing to somehow present within the date of birth. Note that JDs score of 2 in the No1 block, reveals the tendency for this determination to be very self-centred and selfish, even narcissistic [know and remember this: numerology No1 is always all about me and the innate desire to be No1, to win at something and in so doing, serve the egregious ego through this public recognition!]. 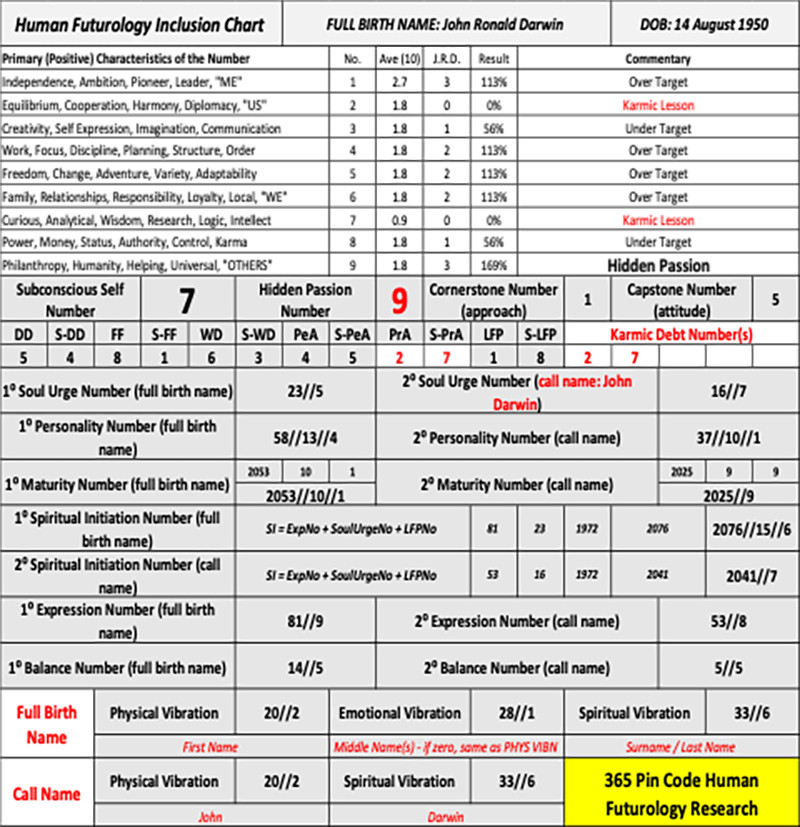 Headline numbers in this table are John’s primary personality (calculated from his full birth name, John Ronald Darwin) which is 58//13//4 – this brings yet another karmic debt number, karmic 13//4 into frame. The dictatorial number 13//4 has as its shadow traits, the desire for excessive control, a ruthlessly crisp tongue (emotionally devastating words) and the need for things to be their way. Rather interesting to note that 2002 [2002 = 2+0+0+2 = 4], the year he faked his own death, was a No4 universal year which synchronised perfectly with this personality number and his personal shadow-self number (bottom number in his birth chart). No4 is also linked with practical, meticulous planning. The No8 vibration which we have extensively focused on in this human futurology of fraudster John Darwin case study, presents as his call name (John Darwin) expression number 53//8. The expression number is how he expresses himself into the world. 53 is the number 5 (the rebellious, sometime reckless, senses driven, adrenaline-fueled number which prizes personal freedom above all else) working through the number 3 (No3 is the carefree number that resonates with creativity, communication, self-expression, having fun, partying etc.).

Darwin introduces the master number 33 into his numerically designed cocktail…

His surname, Darwin, introduces master number 33//6, a number which demands its owner foster and respect responsible (6) relationships (6) especially around family (another No6 theme). His subconscious self is the No7 (SCS7) which when engaged from its dark side, is a very intelligent and secretive vibration. SCS7 implies that deep down he is curiously searching for truths around life its complex construct. His secondary soul urge is karmic debt 16//7 (this is where his No7 karmic lesson will express itself most) which is a deeply troubled karmic number especially on a family relationship level. KD16//7 reveals that he (1) will be searching for deeply significant spiritual truths (7) and life lessons (7) through family (6) and responsibility (6). John Darwin has ALL FOUR karmic debt numbers (13, 14, 16 and 19) in his intelligent mathematical blueprint – that’s quite a nightmarish situation.

Darwin’s No9 hidden passion introduces yet another very dangerous energy into his highly karmic number driven mathematical cocktail. No9 when operating from its dark or shadow side, is the shapeshifter number which can literally morph into exactly what you need it to be, making it a very difficult number or vibration to

read, because if you take things at face value chances are you will get burned.

Human Futurology of fraudster John Darwin: why it all happened in 2002!

365 Pin Code is the world’s leading numerology and human futurology research site. After many years of test and learn modelling exercises, 365PC succeeded at mapping and modelling a person’s experiential lifepath in 4D. This opened a can of worms given that there is now hard evidence in multiple research case studies that our lives are numerically and mathematically designed and that as much as we would love to believe our lives are just random happenstance, this is everything but the truth! The data table below which presents that yearly data matrix around the human futurology of fraudster John Darwin, reveals why the No8 (money, power, control, karma etc.) was so tremendously significant… 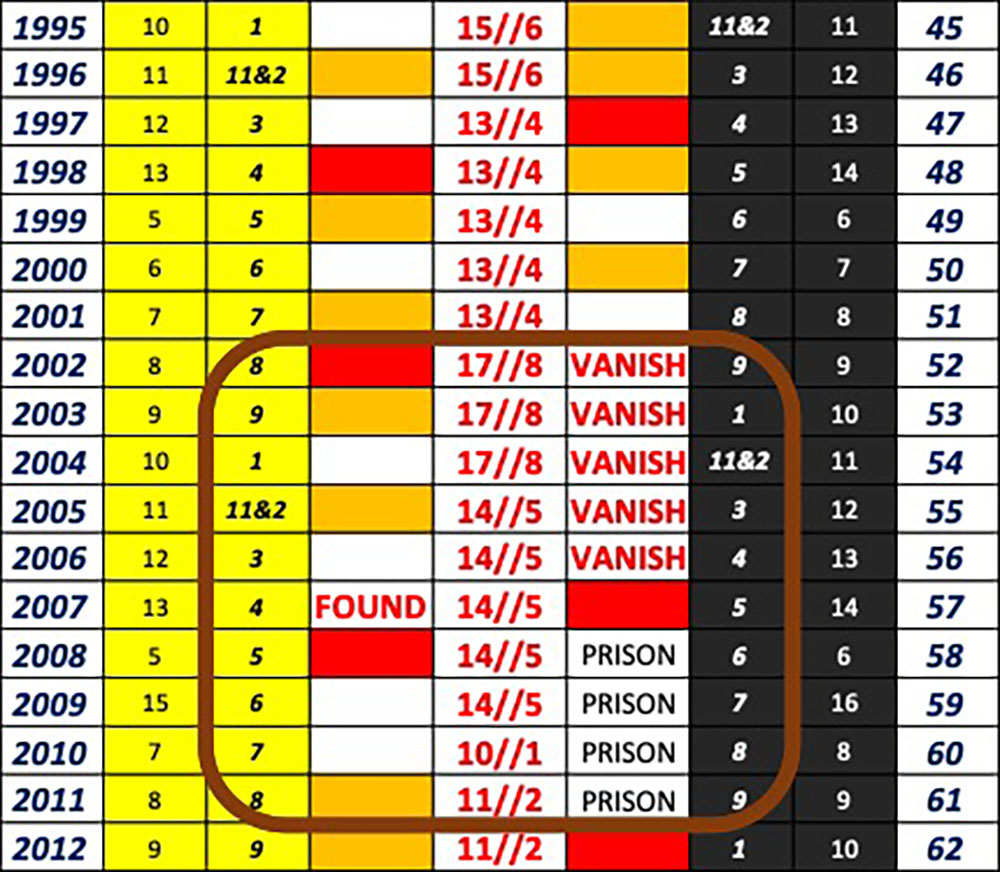 The central column of RED numbers is John Darwin’s Annual Experience Numbers (AENs) which theme his world, year by year. Note how in 2002 the AEN in play is 17//8 which as stated before, synchs with his shadow / emotional life path number and his family number. AEN 17//8 persists through to end of 2004. In 2002 there is a double 8 (red block) expressing itself which talks to an extreme experience family and money wise. In 2005, his AEN changes from AEN 17//8 to AEN 14//5 (the number 5 deals mostly with change and personal freedom related issues). This 14/5 theme of his life path persists through to the end of 2009, with 2007 having a double 5 (red block) on the emotional experience side and 2008 having another double 5 (loss of freedom which resulted from his being jailed) physical experience. There is a new beginning in 2010 which is signalled through his concentrated (as in one year only!) AEN 10//1. Darwin was released early in 2011 which has as its AEN master number 11 (the anxiety fuelled number which synchs with enlightenment and has No2 karmic lesson). Modelled data sets like this always reveal incredible numerical synchronicities between what the unique AEN represents and the actual experience the person has. Hence our contending that much as we would love to think our lives are just a series of random events this is not the truth, we are in fact living a carefully orchestrated grand organised design (invisible, non-material) which is delivered to us experience wise (visible, material) through our bespoke intelligent mathematical blueprint.

Photo by Cameron Stewart on Unsplash

Image by Alexas_Fotos from Pixabay

Image by Gerd Altmann from Pixabay 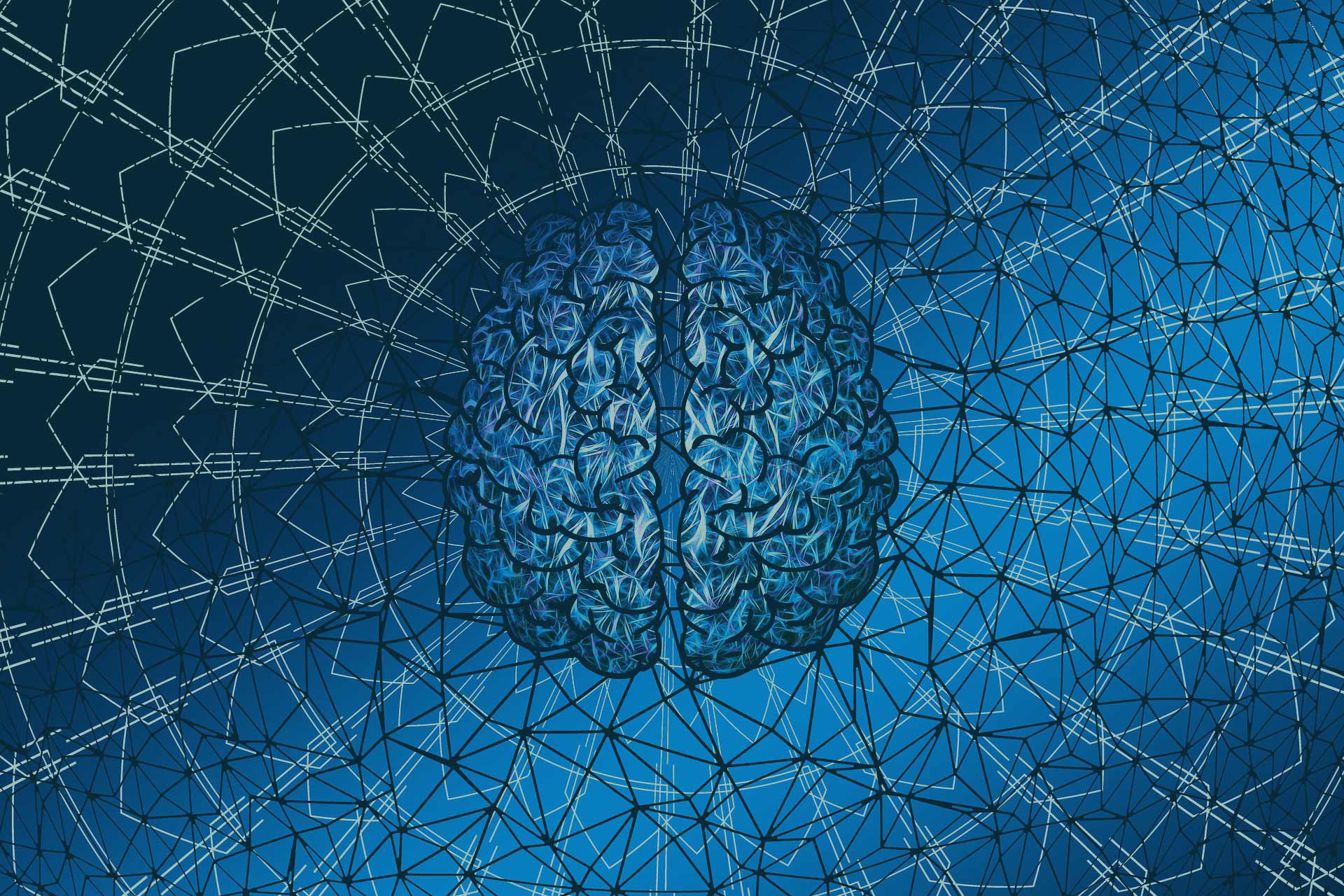